Zack Phillips started riding when he was 12 years old. He got pretty good, pretty fast, and by the time he was 16, was breaking axles and grinding flat spots in pegs. Fortunately for us, he just happened to be working in a hardware store in Rochester, New York and had connections to a local engineering workshop. Deciding that the current gear was inferior, he made some beefier stuff.

The story might have ended there if it wasn’t for a side job Zack also had. He was working as a photographer at BMX competitions on the weekends. He’d see kids break a peg, bend a sprocket or snap an axle at the event, and he decided to start selling extra ones he had made to them. That was back in 1995 and Kink Bike Co. was born.

A year later, they brought out a chain twice as thick as standard ones that could handle the punishment of core BMXers. Then it was onto frames. In 1998, they dropped the Empire, and it was pretty much THE frame of the late 90’s. Big, oversize tubes, clean lines, 6mm dropouts and the pierced top tube, sick. Today, they make a full line of parts and completes, from entry-level to pro-worthy.

Where Kink stands out, is their quality and attention to detail. As a small, rider-owned company, they design and extensively test each and every product they put their name on. Their warehouse, in fact, is in the same building as Coalition and right next door to the famous Forward warehouse. They’ve got 15,000 square feet of space, a good bit of which houses a sick ramp setup of their very own. Not bad for a company that was started by a 16-year-old out of a backpack, eh?

When we first saw them, we knew we had to carry them. Stop by and check out our line-up. We’ll help you get your Kink on right. 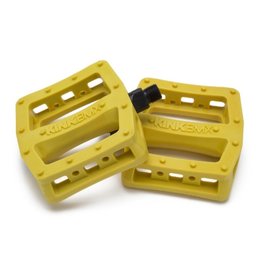